With the new Linjett 39 - you are in control

Linjett Yachts proudly presents the new modell Linjett 39, which will sail to the summer.

A yacht that can be safely handled by one person, the Linjett 39 is another step in Linjett’s design philosophy, which is constantly being refined and improved.

- The helmsman must be in total control. He needs to be able to keep an overview of the yacht and easily access everything he needs to maneuver. It will keep the calm even in tough conditions.

Markus Gustafsson, the CEO of Rosättra Boatyard, describes how the modern digital technology gives the boatyard’s admired craftsmanship new dimension and significance. Already in the drawing stage, it is known how the design will respond to changes to the hull, interior and maneuverability. These digital advances have allowed Linjett Yachts receive several orders of the yacht already before its test sail.

- This is a natural evolution, but also a switch in generations. It is now clearer than ever that there is a team behind each model, rather than just one designer.

Linjett yachts have received exceptional praise for their ability to carry large sails and still balance perfectly, the new Linjett 39 is no exception. A well-balanced boat is fast and can be driven with only a finger on the wheel. Already 20 years ago, all control lines got led back to the helm. Now, add two wheels with separated steering systems for safety, modern electronics and all winches within reach from the helm. Also, the helmsman’s position is now slightly higher. Significant design and planning have been invested to ensure it is comfortable and safe for everyone onboard.

The changes in the cockpit are not immediately noticeable, they are in the details. However, the changes down below are apparent. The interior is built with modern technology to give new impressions. It has opened-up, it feels more like you are stepping into the space rather than stepping down. It is spacious, comfortable, and welcoming. The noticeable changes are higher freeboards and a raised couch roof, which allows for more space and opportunities. To understand the real changes though, one has to get into the structure. For the Linjett 39, Rosättra Boatyard uses the modern technology of vacuum infused vinylester into the sandwich of divinycell. The result is a lighter and stronger hull. This technique is also used for the structural beams, where solid, unilateral fibers have been injected and then glued to the hull. Two sturdy beams, one by the galley, and one at the mast foot which ends at the rigid chainplates, have now reduced the significance of the main bulkhead and therefore allowed a more opened-up salon. After simulated computer tests with redistribution of weight, the team could then take the next step and give the Linjett 39 a significantly larger bathroom in the forepeak.

- And thus, we have been able to build another large room in the aft for a shower and wet gear, says Markus Gustafsson. Comfort both on deck and down below become increasingly important.

The Linjett models has significantly more natural light in the interior. Now, with the recessed windows into the hull, the light and feeling of space is even more enhanced. An appreciated feature not least by those who sail in the archipelago, the home waters of the Linjett yachts. 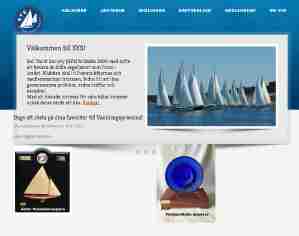